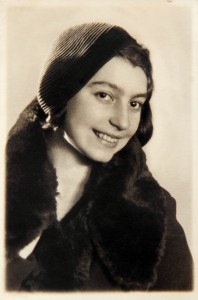 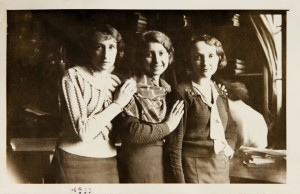 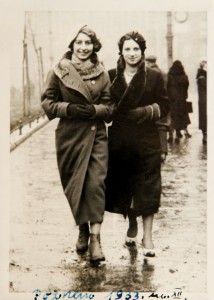 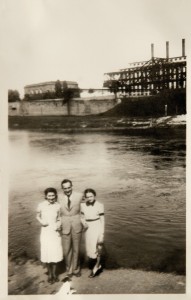 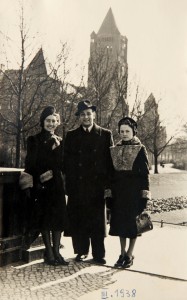 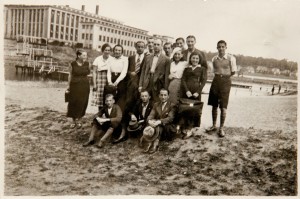 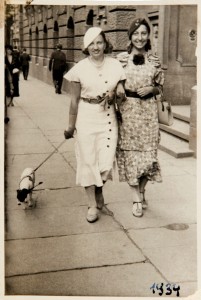 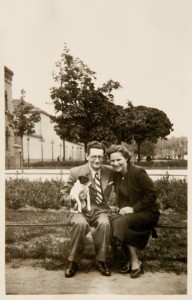 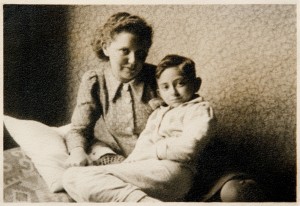 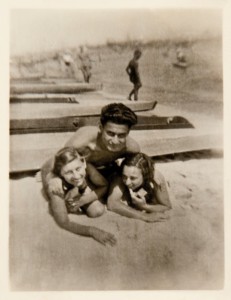 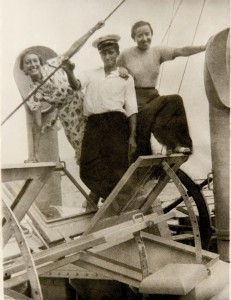 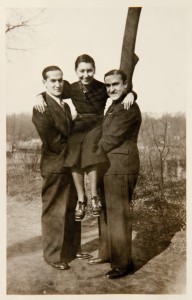 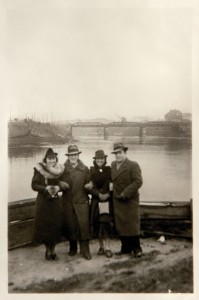 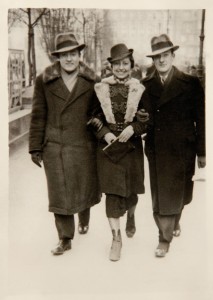 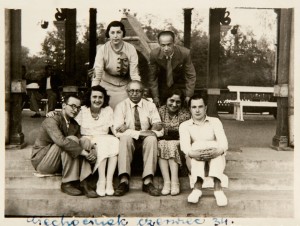 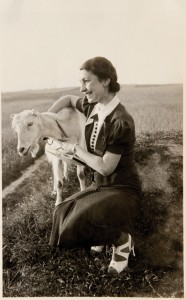 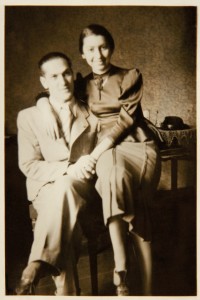 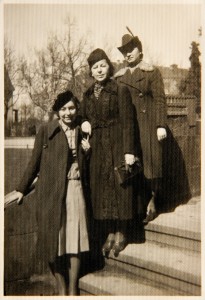 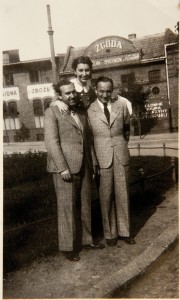 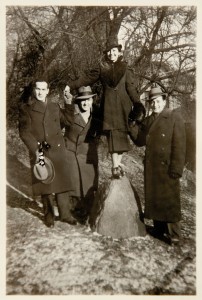 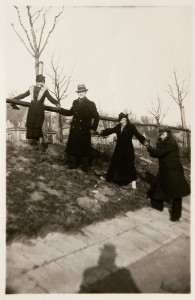 Fira Malemedzon (in the middle) with shop assistants inside the men’s garments shop in the Stary Rynek (Old Market Square). Poznan, 1933

Fira Melamedzon (the one on the left) with a friend on Plac Wolności (Freedom Square), Poznan, December 1933

Fira Melamedzon, Adek Engel from Lublin, a student of Poznan University and Pola Melamedzon from Brzeziny, Fira’s cousin strolling along the Warta river. In the background one can see New Electric Power Station (today Garbary Electric Power and Heating Station) and Czech’s Redoubt – the element of Prussian town’s fortification. Poznan, 8 of July 1938

Fira Melamedzon. Adek Engel and Pola Melamedzon in a park in front of the Teatr Wielki (Great Theatre). Poznan, March 1938

Marek Lewkowicz, the shop assistant in the Melamedzon’s shop with his wife Maryla in front of the Municipal Slaughter in Garbary Dam Street (today Garbary Street). Poznan, 5 of June 1938

Maryla Lewkowicz with little Niutek  at home. On the reverse of the photo: ”Maryla suffering from a cold“. Poznan, 21 of January 1938

Fira Melamedzon, her boyfriend Maks Brandt and their friend Mira Lederowna on the beach in Orlowo, summer 1934

Mira Lederowna and her friend Madzia Einstein with one of the sailors on the pleasure boat SS “Gdynia”. Holidays in Orlowo, summer 1936

Students of Poznan University: Jozio Lustig from Osielsk (near Bydgoszcz) and Adek Lewin from Kutno lifting Fira Melamedzon. Stroll along the Warta river towards Szelag. Poznan, 14 of March 1937

Mira Lederowna, Jozio Lustig, Fira Melamadzon and Adek Lewin strolling along the shores of the Warta river. The railway bridge in Garbary Dam Street (today Garbary Street) and the river port’s fragment are seen in the background. Poznan, November or December 1936

Zygmunt Bluman from Warsaw and Elen Caspari from the neighbourhood of Zbaszyn (sitting on the left side), Rachela Melamedzon, Fira’s mother (standing above them) with friends in a health resort. Ciechocinek, June 1934

Fira Melamedzon in the field neighbouring Brzeziny near Lodz, where her grandparents and branchy family used to live. May 1937

Fira Melamedzon and Jozio Lustig, her boyfriend, a student of Poznan University. 10 of May 1937

Fira Melamedzon, her mother Rachela and her friend Basia Pik in front of the seat of the Poviat Starosty at Waly Leszczynskie (today Niepodleglosci Avenue). In the background (right side) Ursuline Sisiters Gymnasium. Poznan, 9 of April 1939, the first day of Easter.

This website uses cookies to improve your experience while you navigate through the website. Out of these, the cookies that are categorized as necessary are stored on your browser as they are essential for the working of basic functionalities of the website. We also use third-party cookies that help us analyze and understand how you use this website. These cookies will be stored in your browser only with your consent. You also have the option to opt-out of these cookies. But opting out of some of these cookies may affect your browsing experience.
Necessary Always Enabled
Necessary cookies are absolutely essential for the website to function properly. This category only includes cookies that ensures basic functionalities and security features of the website. These cookies do not store any personal information.
Non-necessary
Any cookies that may not be particularly necessary for the website to function and is used specifically to collect user personal data via analytics, ads, other embedded contents are termed as non-necessary cookies. It is mandatory to procure user consent prior to running these cookies on your website.
SAVE & ACCEPT